Art and Culture of Angola 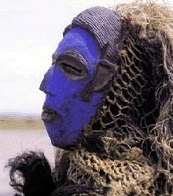 As with most African art, the wooden masks and sculptures of Angola are not merely aesthetic creations. They play an important role in cultural rituals, representing life and death, the passage from childhood to adulthood, the celebration of a new harvest and the marking of the hunting season. Angolan artisans work in wood, bronze, ivory, malachite or ceramic mediums.

Each ethno-linguistic group in Angola has its own unique artistic traits. Perhaps the single most famous piece of Angolan art is the Cokwe thinker, a masterpiece of harmony and symmetry of line. The Lunda-Cokwe in the north eastern part of Angola are also known for their superior plastic arts.

Other signature pieces of Angolan art include: The female mask Mwnaa-Pwo worn by male dancers in their puberty rituals. polychromatic Kalelwa masks used during circumcision ceremonies Cikungu and Cihongo masks which conjure up the images of the Lunda-Cokwe mythology.

Two key figures in this pantheon are princess Lweji and the civilizing prince Tschibinda-Ilunga. the black ceramic art of Moxico of central/eastern Angola Prior to the late 1980s, all marketing of handicrafts were under the control of Artiang, an arm of the Ministry of Culture.

However once this commercial monopoly over the production of art was removed, art in Angola blossomed. As the wooden masks and statues of Africa have grown in popularity in the West, the handicraft industry in Angola has sought to meet the demand for African art.

The stylized masks and trinkets that are created to catch a tourist’s eye are commonly known as “airport art.” They are pieces produced in series, to the taste of the average tourist, but lack any real link to the deeper cultural undercurrents of the people. 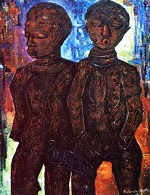 Futungo also has the added advantage of being near the beautiful beaches to the south of Luanda, where many of Luanda’s residents spend their weekends enjoying the sun and sand of Mussulo bay. Although the majority of items found in Futungo market are of the “airport art” variety, a serious African art collector can find an occasional art treasure.

The political and social upheavals in Zaire in the early 1990s resulted in an increase in the smuggling and pillaging of art treasures from the country’s museums. Some of these pieces find their way to Angola and are often sold at very high prices. Even if one is not in the market for an African souvenir, a trip to Futungo market can be an adventure.

Traders often arrange to have musicians play traditional instruments, such as the marimbas and kissanges, xingufos (big antelope horns) and drums to give the feel of a village festival. Men dressed as warriors, wearing clothes of antelope and cougar skins, necklaces of shells and rattles on their ankles, add to the local flavor of the market.